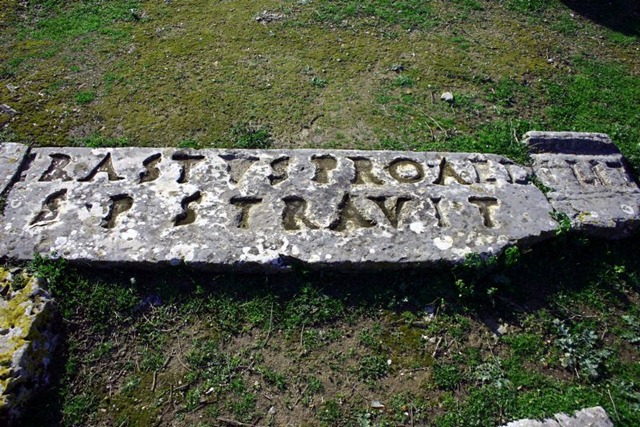 In case you missed it, the feast day of St. Erastus, friend and associate of the apostle Paul, came and went three weeks ago in the western church calendar (July 26).  And in case you missed him, Erastus is a relatively minor figure mentioned only three times in the New Testament: 1) In Acts 19.22, Paul sent “into Macedonia two of those who ministered to him, Timothy and Erastus, but he himself stayed in Asia for a time.”  2) In 2 Timothy 4.19-21, the writer says, “Greet Prisca and Aquila, and the household of Onesiphorus. Erastus stayed in Corinth, but Trophimus I have left in Miletus sick.”  And 3) in Romans 16.23, Paul concludes: “Gaius, my host and the host of the whole church, greets you. Erastus, the treasurer [oikonomos] of the city, greets you, and Quartus, a brother.”  Later authors like Chrysostom, Epiphanius, and Thedoret, among others, commented only briefly on Erastus, and a later tradition linked him with an Erastus bishop of Paneas (Palestine), now celebrated in the Orthodox church on Jan. 4 and Nov. 10.

For such an unknown figure, Erastus stands at the center of a major contemporary debate among New Testament scholars.  The debate concerns the social status of the earliest Christians and hinges on the interpretation of the Greek word oikonomos of Romans 16.23 (the word translated in the NJKV above as “treasurer”) as well as the tangential connection of the Erastus of the New Testament to an Erastus named as aedile in a Roman pavement found east of the theater in Corinth.  This inscription, uncovered in the late 1920s, reads “Erastus for his aedileship paved (this) at his own expense.”

If Erastus, the aedile named in the inscription, is the same as Erastus the oikonomos of the book of Romans (and presumably Acts and 2 Timothy), we have the exceptional coincidence of a New Testament figure being named in an archaeological context.  More importantly, at least for scholars of 1 and 2 Corinthians, we have a believer of the earliest Christian community coming from the highest ranks of Roman Corinth.  This, in turn, would help to explain the language of social division and stratification of Paul’s Corinthian community found in 1 Corinthians: rich – poor, wise – foolish, powerful – weak, etc..  However, if the two Erasti are unrelated, the argument for local elite numbering among the first Christians loses much of its force.

Since Cadbury’s discussion of the inscription (1931), scholars have been interested but skeptical about the connection.  The Latin word aedile mentioned in the inscription is clearly not equivalent to the Greek word oikonomos named in Romans 16.23—the former was an official magistrate of public works (hence, the dedication for the pavement), the latter was connected with financial management and could refer to either a lowly steward or a high-ranking financial officer.  Yet, a generation ago Theissen proposed that the Erastus of Romans 16.23 could have been a quaestor before he became an aedile, for the Latin word quaestor might just be the equivalent of the Greek oikonomos.  In that case, the Erastus inscription and the verse from Romans would shed light on the course of honors that Erastus followed in his political career.

In recent years, the debate over Erastus has grown more intense as New Testament scholars have argued about the social context of the first urban Christians.  Last year, in fact, was a bumper year in the search for the historical Erastus.  First, John Goodrich published “Erastus, Quaestor of Corinth: The Administrative Rank of ὁ οἰκονόμος τῆς πόλεως (Rom 16.23) in an Achaean Colony,” in which he argued in support of Theissen’s thesis that an oikonomos could be the equivalent of a quaestor.  To make the argument, he collected a large corpus of oikonomos inscriptions from Greece, the Aegean, and Asia Minor dating from the late 4th century BC to the 4th c. AD, and presented a recently discovered inscription from nearby Patras, another Roman colony.  This inscription shows a clear link between the Greek oikonomos  and Latin quaestor.  An oikonomos can be a quaestor.  The abstract to the article:

“Erastus (Rom 16.23) has featured prominently in the ongoing debate over the social and economic make-up of the early Pauline communities, since how one renders his title (ὁ οἰκονόμος τῆς πόλεως) dramatically affects the range of economic stratification represented in the Corinthian church. Relying chiefly on epigraphy, including an important new inscription from the Achaean colony of Patras, this article engages the scholarly dialogue about the Latin equivalent of Erastus’ title, rebutting the arguments in favour of arcarius and aedilis, and contends that he served as quaestor, a high-ranking municipal position exclusively occupied by the economic elite.”

As Goodrich concludes his discussion of the inscription (p. 112), “Since the text was derived from an Achaean colony in close proximity to Corinth with an apparently identical political structure as Corinth, it provides the best known comparative evidence for the rank of municipal οἰκονόμοι in Roman Corinth. In light of this evidence, it is then highly probable that the Erastus from Rom 16.23 was the quaestor of Corinth.”

At about the same time that Goodrich’s article was published, the Corinth in Context volume also appeared in print and in it an article by Steve Friesen called “The Wrong Erastus: Ideology, Archaeology, and Exegesis.”  In this article, Friesen critiqued the misuse of archaeological evidence by New Testament scholars and a generational trend to think of the Erastus of Romans as a character with aspirations of upward social mobility.  The Erastus inscription from Corinth is in a secondary, not primary, context and, in any case, was probably not commissioned before the mid-second century AD, well after the time of the Erastus of Romans 16.  The inscription is not, therefore, evidence for the man named by the apostle Paul but a non-Christian aedile who hailed from the highest status group of Roman society.  By contrast, Erastus the oikonomos was a low-status (non-citizen) manager of finance, possibly a slave, and probably not a Christian.  The first Christian communities at Corinth were overwhelmingly poor, like the population of the Roman world generally.  Friesen concludes that scholars should dispense with the ‘ideology of social mobility’ which has blinded them to the inequalities that characterized early Christian churches.

Finally, Alexander Weiss published a short study in response to Goodrich (and ultimately, Theissen) critiquing Goodrich’s view that Corinth and Patras had identical political structures.  Weiss, in fact, argues that political structures were very different in the two cities—reflecting different foundations as Julian and Augustan colonies—and that the municipal office of quaestor did not even exist at Corinth.

This is surely not the last word, though, as Goodrich has an article (to be published in October) called “Erastus of Corinth (Rom 16.23): Responding to Recent Proposals on His Rank, Status, and Faith,” in New Testament Studies 57.3 (2011), which responds to both Friesen and Weiss. His abstract:

“Studies on Erastus, the Corinthian oikonomos (Rom 16.23), continue to dispute the fundamental make up of his identity, including his administrative rank, socio-economic standing, even his status as a believer. Ultimately seeking to defend the view that Erastus was a Christian who served as a Corinthian municipal quaestor, this article responds separately to two recent essays, replying initially to Weiss’ charge that Corinth did not have the municipal quaestorship, then critiquing Friesen’s proposal that Erastus was an unbelieving public slave.”

Goodrich will deal with Weiss’ direct critique of his comparison between Patras and Corinth by some comparative examples of quaestors in pre-Augustan colonies.  And he also intends to problematize some of the provocative lines of argument in Friesen’s reassessment of the Erasti.  We should also expect him to have things to say about oikonomoi in a forthcoming book called Paul as an Administrator of God in 1 Corinthians. (Thanks to John Goodrich for sharing the above information with me in advance of publication).

These 2010 studies are significant in highlighting the state of the field on the historical Erastus and poles in the debate over the social constituency of the first Christian communities.  They also highlight the methodical problems of linking text with material culture.

Below is an incomplete bibliography relevant to the Erastus debate.  If you need a more exhaustive listing, consult the 2010 articles outlined above.

[The debate on Erastus continues here.]