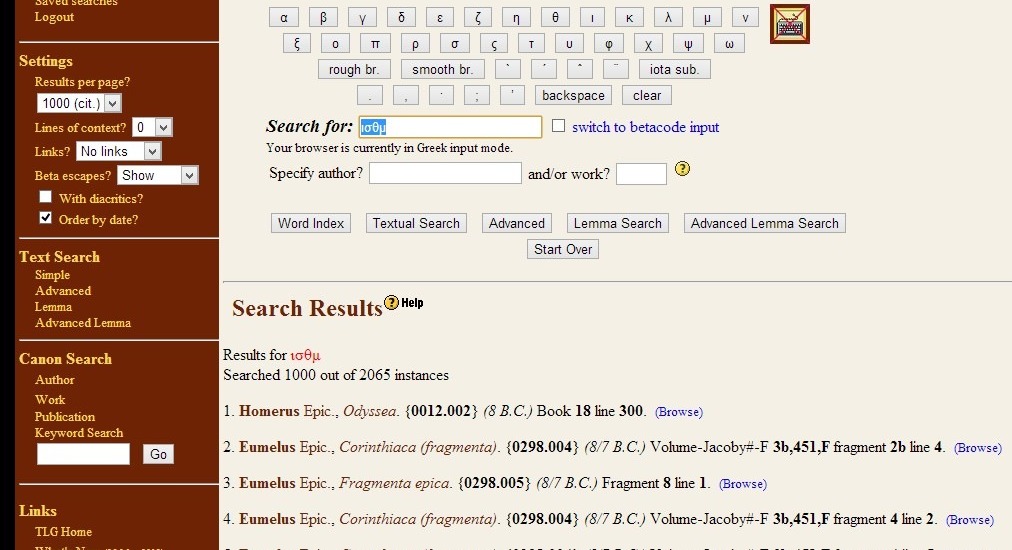 On Friday, I wrote about how to convert a list of ancient Latin references generated from the Packhard Humanities Institute’s Library of Classical Latin Texts into a digital library of citations in EndNote or Zotero. Today, we turn to the parallel process of converting citation lists from the Thesaurus Linguae Graecae database into EndNote or Zotero. I’ve copied over much of my instructions from the first post into this second one—so there’s some redundancy here.

“Licensee make use of the Licensed Materials as is consistent with the Fair Use Provision of United States and International copyright laws. Licensee may not under any circumstances download or print large portions of a text or entire texts.”

So, it is important to note that the following steps have nothing to do with the Greek texts compiled in TLG but with the index of citations to particular words. Indeed, one should modify even the citation lists to keep within Fair Use Provision.

The steps to convert a library of citations are largely the same as those we outlined for the PHI Latin texts but require a good deal more text manipulation in MS Excel or Python (if you know it) because there is more metadata, and citations are not listed in entirely standard ways. Note that this will take some time, especially with larger libraries of several thousand entries. But the time it requires to manipulate, say 3,000 citation records, is not nearly as long as keying even 200-300 entries manually.

So, the steps mirror those we delineated for the PHI Latin texts.

Step 1: Select and Copy Greek Citations via the Simple Text Search of TLG

Run a simple text search on a key word in TLG. Set “Lines of Context” to ‘0’ so as to not capture any Greek texts (as noted above). Set “Results per page” to 1000 (cit). Order by date. Run the search and generate the results as follows. For my example, I have used the root ισθμ, so as to capture all Greek examples of isthmos, isthmiaka, isthmia, etc…

At the end of the results, click on the Printable Form button and copy the citations.

Paste into MS Excel (Paste to “Match Destination Formatting” to eliminate the hyperlinks and color).

If there are additional Greek keywords for your library (e.g., Kenchreai, Lechaion, Korinth-), repeat this step and dump into separate worksheets in Excel. You’ll want to keep them separate for now so that you can add English keywords before combining.

Remove the numbers generated during the TLG search. To do this, select Column A and take out the numbers listed before the author by using the REPLACE function. After you eliminate the numbers, you will be able to sort author names alphabetically.

You can select then column A and sort to get rid of the extra spaces between lines.

Since you’ve pasted every record into a single cell, you’ll need to separate values via commas so that you can delimit into different cells.

The following record, for example, will create a division at the comma so that author is separated from work, TLG text #, date, citation.

You’ll want to add commas after each of these to prepare the record for delimitation. Mostly this is a straightforward process. Select Column A. Use Find – Replace All to add commas before the ‘{‘, after the ‘}’, and after the ‘)’.

The example given above would be changed to

Note that some records will create problems for delimiting by comma:

Using the find-replace to add a comma after the ‘)’ of the date in the first example will also add one after the ‘)’ of fragmenta. Delimiting via the comma (Step 3) will create breaks in the citation after the 3b and the 451. The solution is to CONCATENATE these problem records (Step 4).

Select Column A. Select the Data tab and then “Text to Columns” option. Where it says “Choose the File Type,” select the Delimited Button.

Select “Next” and check the box next to Comma as your Delimiter:

Hit “Next” and then “Finish”. After adjusting for column width, you should have something like this:

Step 4: Concatenate and Clean Up Text

Everything should be in 5 columns; if it is not (as in the case of Hecataeus above), there were additional commas that created breaks.

You can clean this up by deleting cells (as in the extra periods above) and using a formula with the CONCATENATE function to combine cells. Combine in a new column (K in the example below) and then copy and paste the value into column E. Fixing these glitches may take an hour or two to fix depending on the number of records (it took me two hours to edit 4,500 records). 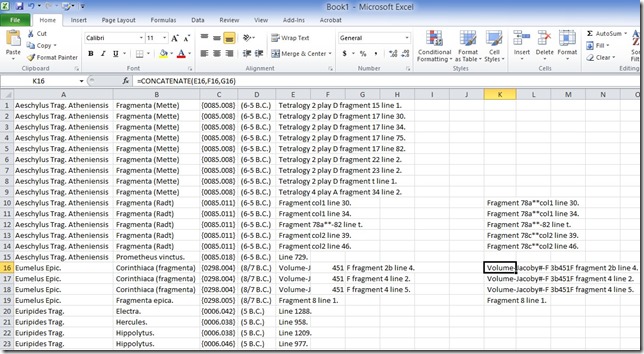 You may also want to CONCATENATE columns B and E so that the citation shows up in the title field in EndNote and Zotero. To do this, use a formula with CONCATENATE so that you create a new column F which combines title (Column B) and citation (Column E).

Then, copy and paste value of new column F into Column B, replacing the old values of Column B. Delete columns E and F so that you have 4 columns. 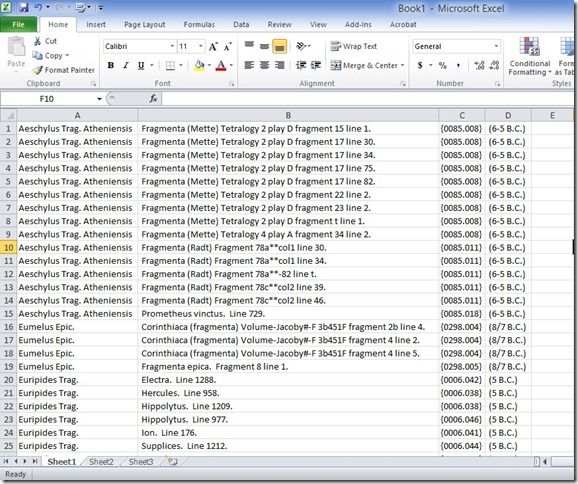 At this point, you’ll want to clean up the text and prepare it for export into EndNote. If you have multiple worksheets consisting of different Greek keywords, add a fifth column in each of those worksheets, and insert the searchable keyword in English. Then combine all the worksheets into a single master worksheet.

After you’ve combined, you may want to clean up your data in a number of different ways: 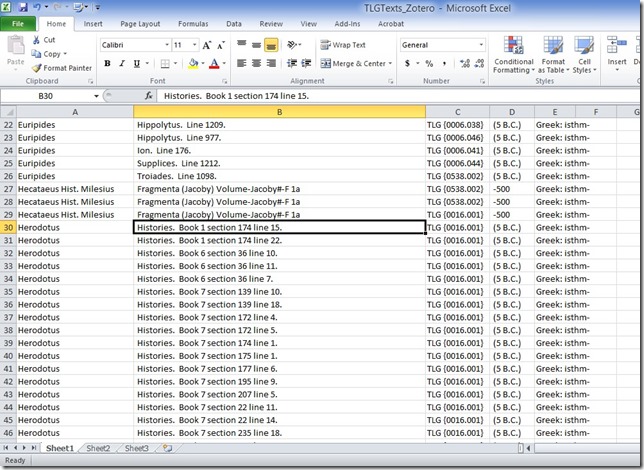 Again, it’s easier to make batch changes with different Excel functions here than change them later in Zotero or EndNote.

Insert a new row 1 at top of spreadsheet with the key heading words shown in the image below. EndNote will use these headers to interpret where the values go during the import. The spelling of these headers must be exact or there will be problems in importing.

Insert a new column 1 and title it “Reference Type.” Beneath this, for all the records, paste the value “Ancient Text” like the following (“Book” will also work as a recognized value).

When you are finished editing, save as a Text (Tab Delimited File).

Step 6: Clean Up in Word

I am not sure this step is necessary, but this YouTube tutorial video suggests you need to clean up the text by eliminating or replacing all quotations, apostrophes, wildcards, and the word “and”. I was able to import texts successfully without this steps—so if you have problems in Step 7, return to Step 6 and see if it makes a difference.

For this step, Zotero has provided documentation here.

Last step is open up Zotero for Firefox, or Zotero Stand-Alone.

As I noted in the previous post, I would be interested in hearing whether others have done this a different way, or how these steps might be improved to generate a more powerful database.