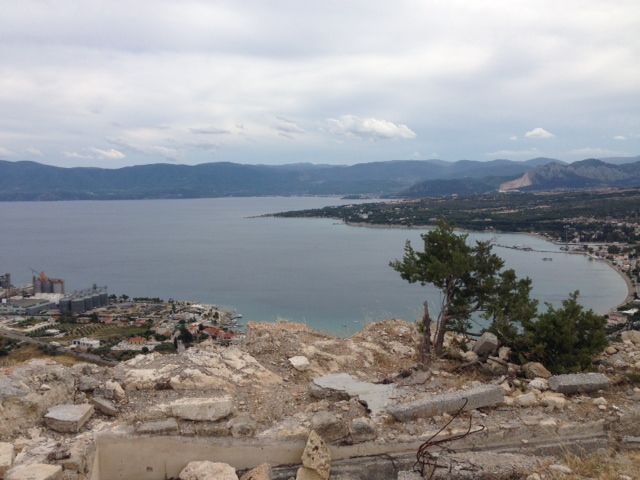 I had always wanted to climb the ridge above Kalamaki Bay on the mainland (eastern) side of the Corinth Canal. Ridges often reward archaeologically-minded hikers with unexpected rewards,and this one was already associated with ancient remains.

The Kalamaki Ridge is that prominent height that one passes beneath when entering the Peloponnese via the old national road, new highway, or the high-speed train. In the olden days, say the 16th-early 19th century, travelers misidentified the peak as “Mount Oneion,” following a confusing note of the geographer Strabo about the location of that mountain. The good work of topographers and surveyors in the 19th and 20th century set the record straight: Oneion was the spine on the southern side of the Isthmus, not the little hill at Kalamaki Bay.

The Kalamaki ridge is the top peak in the image below.

Unlike the Monastery of St. Patopios, the ridge above Kalamaki is much less accessible. Although it’s not a rugged path to get there, there is no signage to direct the visitor along the path to the peak. Kaylee, Tim, and I were forced to resort to trial and error (with some in-built GPS in our smart phones) to navigate our way along the correct roads linking the road to Loutraki with the series of spurs trending north-south above the narrow coastal plain.

Our first go was a miss. The ridge we hiked up to was not the right one. But we did stumble upon an impressive rural Classical-era site — a farmstead perhaps? — with amphora fragments, stone vessel rims, and painted Laconian rooftiles that had been turned up by some (presumably clandestine) excavation. Without access to my notes, I’m not sure whether this site was one of the two sites identified as “Kalamaki A and B” by James Wiseman in his important book on Corinthian territory.

Our second hit was more successful. We found the road that followed the spur to the very tip. As we walked down a long gravel road leading us deeper into a remote location and heard voices in the distances, we each imagined that we were going to stumble upon some illicit activity. We were not disappointed to find only a woman and two men gathering firewood for next winter.

The reward for our efforts was a commanding view of the two capes that defined the Isthmus: Akra Sophia (center) and Akra Sousaki (visible in the second picture below).

Also splendid shots of the narrow strip of coastal plain.

The Ayios Dimitrios Ridge (left-center foreground), the real Mt. Oneion range (left-center background), and Acrocorinth (right) in the distance. That’s Kaylee Schofield and Tim Hampton in the abandoned remains. I warned them not to stand along the edge which is sheer cliff. The woman told us that the ruined building on the peak marked the remains of a German guard tower from World War II. Given the numerous German remains on the Isthmus, that is certainly possible. 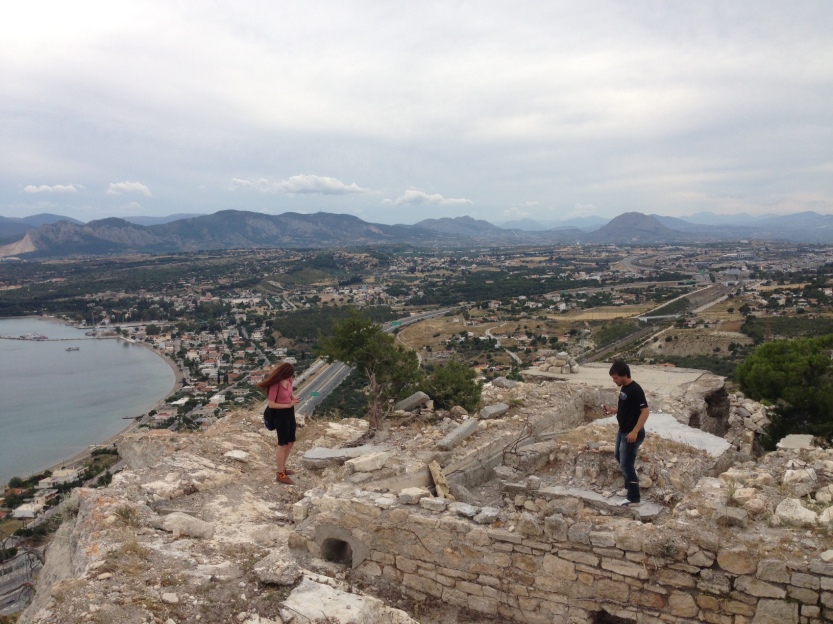 What is indisputable is the geodetic marker on top. Another photo to prove I was there.

Another day, another good hike that has helped to visualize how ancient writers defined the landscape known as the Isthmus.