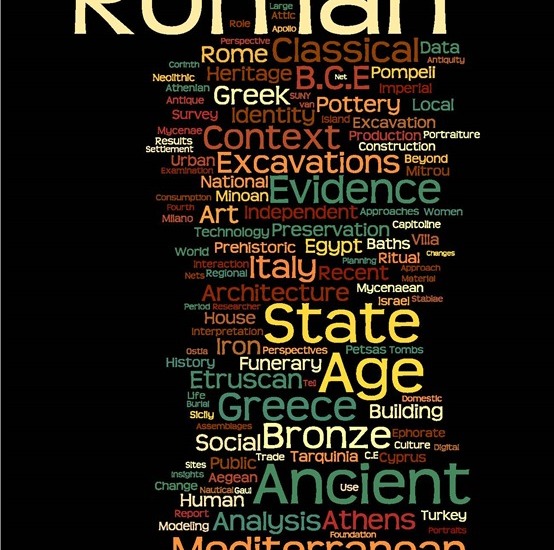 One of the small benefits of not attending the annual meeting of the Archaeological Institute of America next month is that I will not have to spend Christmas break frantically working on a paper that I was unable to complete during a busy semester. On the other hand, New Orleans in January should be fantastic, with pleasant weather that contrasts with the nightmare AIA in the Snow of Chicago 2014.

The conference website notes 150 archaeology sessions and 800 speakers—which doesn’t include papers of the parallel meeting of the Society for Classical Studies (formerly APA). As in years past, I’ll post the smattering of paper titles on Corinthiaka subjects, but first, I couldn’t resist another word cloud image of the AIA 2015 after playing around with SBL titles last month. This Wordle image is based on all the AIA paper titles stripped (or mostly stripped) of presenter titles, affiliations, institutions, and meaningless keywords. 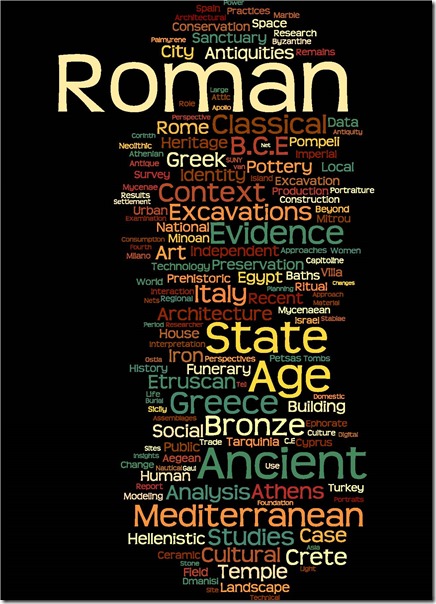 The hit subjects this year are Mediterranean, the Roman period, and the State (I should probably have stripped Ancient and Age which are too generic to be useful). Conference attendees will hear much about – gasp – the traditional places of classical archaeology: Italy, Greece, Crete, Athens, Rome, and the Etruscans (Cyprus, Sicily, Turkey, Spain, and Israel remain secondary). The Roman period is most frequent, but Bronze Age and Classical topics follow close behind (note the smaller Hellenistic period – remarkable given its vast geographic scope – and the tiny Byzantine period that must appear in only a handful of papers). I am glad to see that the “public” makes a modest show and that “evidence” and “analysis” are so important, but the tiny “digital” is surprising given its prominence in the humanities disciplines.

The Corinthiaka papers from the Program include: