This new edited collection devoted to the study of Mediterranean kitchen ware is a welcome development in the scholarship of ancient pottery, the most ubiquitous object unearthed in excavation and documented in regional surveys. Most publications on Hellenistic, Roman, and Late Antique pottery have focused on amphoras (storage and transpor 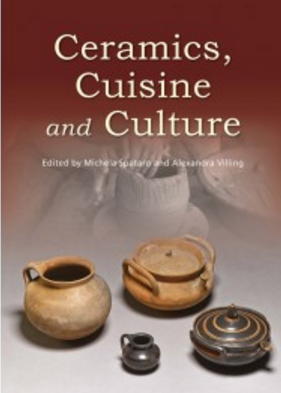 t vessels), or fine table wares (for dining), material classes that were produced and regularly exchanged across the Mediterranean. The gritty, scorched, utilitarian kitchen wares, however, have been relatively neglected, even though they comprise one of the most common kinds of pottery found in Hellenistic and Roman contexts and were the basis for one of the most fundamental human activities in the ancient world: cooking and food preparation As they tend to be regionally produced, and regionally produced in similar forms over long periods of time, they mark significant indicators of regional tastes and traditions. Sarah James’ important new study of interim period floor deposits from the Panayia Field in Corinth, for example, has highlighted cooking vessels as one of the best indicators of a population of Corinthians still living in Corinth the century after its sack in 146 BC (see pp. 34-36 of James’ essay in Corinth in Contrast).
Edited by Michela Spataro and Alexandra Villing, Ceramics, Cuisine and Culture: The Archaeology and Science of Kitchen Pottery in the Ancient Mediterranean World  (Oxbow Books, 2015) includes essays spanning from the Bronze Age to the Modern period, although many of the essays focus on Hellenistic and Roman subjects. As the table of contents indicates, several essays consider kitchen wares in Peloponnesian and Greek contexts near to the Corinthia, including the nearby Berbati Valley, Laconia, Aegina, and Athens.  And as the introduciton states, all of the essays aim to “tease out what kitchen wares can reveal about past and present societies and their development, by utilising, combining and pushing the boundaries of the diverse investigative tools available today.”
Here’s the abstract:

The 23 papers presented here are the product of the interdisciplinary exchange of ideas and approaches to the study of kitchen pottery between archaeologists, material scientists, historians and ethnoarchaeologists. They aim to set a vital but long-neglected category of evidence in its wider social, political and economic contexts. Structured around main themes concerning technical aspects of pottery production; cooking as socioeconomic practice; and changing tastes, culinary identities and cross-cultural encounters, a range of social economic and technological models are discussed on the basis of insights gained from the study of kitchen pottery production, use and evolution. Much discussion and work in the last decade has focussed on technical and social aspects of coarse ware and in particular kitchen ware. The chapters in this volume contribute to this debate, moving kitchen pottery beyond the Binfordian ‘technomic’ category and embracing a wider view, linking processualism, ceramic-ecology, behavioral schools, and ethnoarchaeology to research on historical developments and cultural transformations covering a broad geographical area of the Mediterranean region and spanning a long chronological sequence.