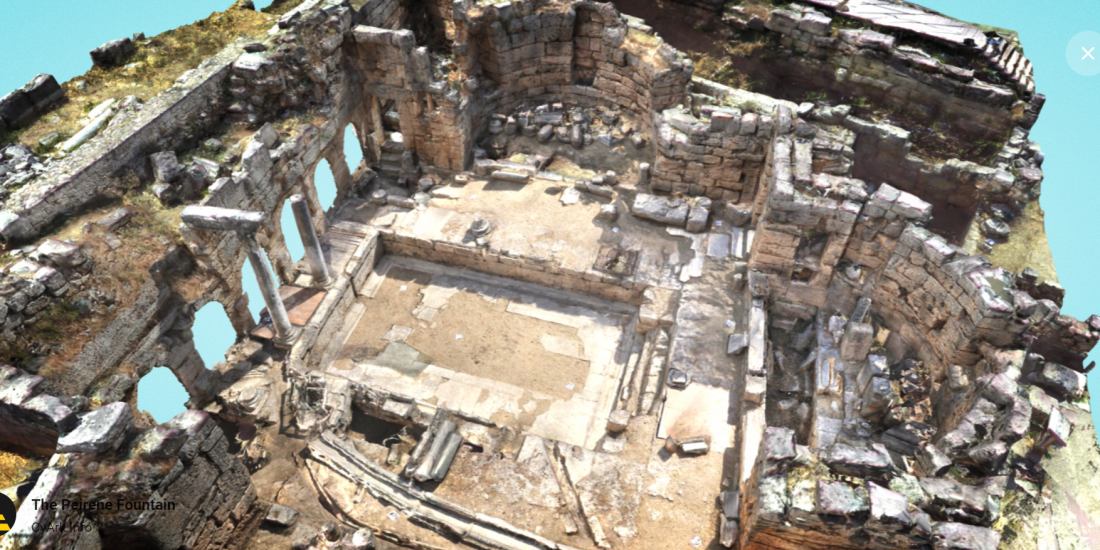 Years ago, a visitor to ancient Corinth (and other sites of Greece) had immediate access to most of the archaeological remains within the site. One could stand directly next to one of the standing columns of the Temple of Apollo, or even climb within the Fountain of Peirene, as I know a group of university students did two decades ago. Open access provided physical contact with remains thousands of years old, and the first-hand experience of exploring the complexities of ancient architecture, but this was not necessarily all good. There were dangers in letting visitors climb in and among the site’s entire remains, and the monuments themselves undoubtedly suffered for the wear. Eventually, the ropes, rails, and fences came, which bounded and directed the visitor’s experience, restricting access and keeping the visitor at a distance. At some sites, such as the fenced Lechaion basilica, fences effectively barred visitors from any access except during those rare times when the site opened its gates.

Digital environments are changing all of this again. While we cannot physically touch an archaeological site remotely, the advent of new tools for exploring sites from a distance mark an exciting development in archaeology today. You may recall that at the end of the excavation season in 2015, the ASCSA Corinth Excavations reported on efforts by members of CyArk — a non-profit that preserves cultural heritage sites through 3D modeling — to recreate the Peirene Fountain and Temple of Apollo. Last week CyArk and Google Arts and Culture announced a new partnership to make 3D models of Corinth and other archaeological sites around the globe available through its free digital archive. A gallery called Open Heritage features online exhibits and 3D models of sites and monuments. As the blog for Google Arts and Culture noted,

As part of this new online exhibition you can explore stories from over 25 iconic locations across 18 countries around the world, including the Al Azem Palace in war-torn Damascus, Syria and the ancient Mayan metropolis of Chichen Itza in Mexico. For many of the sites, we also developed intricate 3D models that allow you to inspect from every angle, using the new Google Poly 3D viewer on Google Arts & Culture.

Greek Reporter provides this brief overview of the work in Greece, with links to a TED Talk with Ben Cacyra, founder of Cyark.

Remote visitors to the Ancient Corinth Exhibition may with this slideshow “Explore Ancient Corinth Expedition” which explains how CyArk created their 3D models of Peirene Fountain and the Temple of Apollo (through LiDAR and photogrammetry) and showcases videos of late antique frescoes within the fountain of Peirene.

The expedition also links to pages that allows anyone to download the data. Here’s the lead page for the expedition:

In collaboration with the American School of Classical Studies at Athens and the Hellenic Ministry of Culture, CyArk documented the mythical Peirene Fountain and the Temple of Apollo in the city of Ancient Corinth, Greece. Survey of the extant structures was conducted primarily with LiDAR and both terrestrial and aerial photogrammetry. The surviving frescoes within the Peirene Fountain were surveyed with an Artec scanner, which measures the 3D shape of a surface using pulsating light and a camera system. CyArk’s digital documentation of the temple and fountain provided the ASCS with accurate and precise data on the current state of preservation for both architectural complexes. In particular, it was important to record Peirene which is currently closed to the public due to concerns surrounding its preservation. This work was made possible through the generous support of the Macricostas Family Foundation

Then go on to explore the interactive map that allows any viewer to drop the little yellow street view figure onto any of the photogrammetry points. Voila — anyone can actually move within the Fountain of Peirene for the first time in decades. You can also explore 3D models of the Temple of Apollo and Peirene Fountain.

Recall that Google has already made available interactive imagery of Ancient Corinth through its street view feature: you can drop into almost any street in the village anytime you want. Through its “photo sphere”, you can also drop into the archaeological site and have a look around.

The Open Heritage collection along with Google Maps provides another great opportunity for teaching students and the public outside of Greece about ancient Corinth.